Feeling so discouraged at the moment...it's so discouraging to me to realize I spend my entire days more days than not trying to correct inappropiate behaviors.  Of course, these issues are a result of sensory problems. but I'm telling you it's DISCOURAGING. I'm constantly, constantly saying two particular phrases all day, almost every day.

It's the same as when I'm "teaching".  Trying to teach her the same things over and over again that she never seems to grasp.  I'm tired.  I'm just tired and feeling sad and discouraged. There are nights when I just feel like I have nothing left...nothing left to give my husband, my kids or even myself.  exhausting.

Dr Pulmonary gets a visit

Today we had a routime visit with Lillian's pulmonologist.  All went well.  Her sats were slightly better, but still not that magical 100 I was hoping for she kind of bounced around between 93 and 96.  I did ask him if he felt moving her to a year round warm climate would help her at all and his first response was, "are you moving?" My response was that it is not imminent.  That being said,  we've experienced a lot of untimely death recently and all my mind can think about is how can I improve Lillian's quality of life....we are, for the most part, house bound...and I thought a warm climate year round would at least offer the ability to be outside daily more often.  I still think it's a worth while thought.  Health wise, probably wouldn't matter much.  Initially, we would see improvement, but that would not likely continue.  He did recommend a dry heat climate if we actually did move.  Anyway.....I do find if she is off her pulmicort even one day she starts to cough immediately.  She absolutely needs that daily steroid.  It's kind of scary.  OH, OH, OHHHH, the biggest news, she weighed in at.....get ready now....a whopping 41 pounds.  I swear I never thought this tiny girl would break the 30's.  woo to the hoo.  I mean, it doesn't put her on any charts or anything, but hey, I'll take it!

I have been able to increase the rate of her feedings, almost getting her feeds in in about thirty minutes.  Maybe more like 40 but that's a big jump from an hour.

I think that's about it for today.  Kids are about to come home and I need to get on to making dinner. 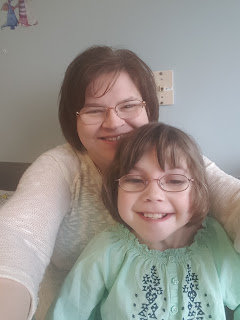 Posted by Michelle at 3:23 PM No comments: