Today Lillian had her bi-yearly renal ultrasound and dr visit.  Her kidneys have grown considerably.  They were happy with that.  She didn't show any hydronephrosis, which was good.  She has not had any UTI's or infections, so that is all good.  There was, however, quite a bit of drama when we arrived, because a) we have to travel over an hour to get there, b) we have to push water through her tube to make sure her bladder is full, so c) when we get there she has to "go" so badly she is freaking out because she thinks she's going to pee her pants.  I had to physically restrain her on the table for them to get the initial pictures with the full bladder.  We then race to the bathroom and someone is in there.  (side note, does anyone think it's odd that a urology office only has ONE toilet...for PEDS?) Stressful.  Lots of stress.  After she emptied, which was a LOT, we went back and they said she was still pretty full.  So, back to the potty we went.

If she begins to have infections or incontinent issues, the testing they will need to do have to ramp up.  She said she might need a urodynamics test in the future to test her bladder pressures.  The bladder has more risk of problems because of her chromosome abnormality.  The vesicoureteral reflux will not be addressed unless she becomes symptomatic with infections.  All in all a great visit, minus the arrival drama.


Sunday I was having a bad " mental day".   I had wanted to make a visit somewhere (because we are basically homebound except for dr visits and those we try to push out of the winter as far as possible) I was suffering a little housatosis, but there was always one place I could go safely without concern for getting sick.  That place has been taken away from me.  I was sad and I still am.....just please when you think of us, say a tiny prayer for me.  There are things in my life that I'm settled with, but sometimes the grief of it all washes over me and there's nothing I can do about it.  I have moments of overwhelming discouragement from time to time. So friend, I leave you with this, are you weak and heavy laden?  Then Jesus said, "Come to me, all of you who are weary and carry heavy burdens, and I will give you rest.  Take my yoke upon you. Let me teach you because I am humble and gentle at heart, and you will find REST FOR YOUR SOULS. For my yoke is easy to bear and burden I give you is light. " Matthew 11 : 28-30  I'll rest my soul there.
Posted by Michelle at 7:23 PM No comments:

Dental and growth updates and a bit extra...

First off, shortly after Thanksgiving, Ezekiel got sick and just a few days later Lillian got sick with something that seemed entirely different, so for about a week I had two pretty sick kiddos, very little sleep, he had croup and in between his bathroom steam treatments I was having to give Lillian additional breathing treatments.  Her asthma flared and it took steroids for him and two solid weeks for both of them to be completely well.

In January, Lillian had her quarterly dental appointment.  She did very well, she is ALWAYS highly anxious, but with some calming essential oils and a hand held diffuser ( a very nifty Christmas gift) she went through it like a champ.  Anxiety, but infinitely better than when we started.  That was the good news.  The bad news...she has a broken tooth.  Can I just say how upsetting and discouraging that piece of news was.  The end process that will eventually take place is NOT something I look forward to.  The dentist is ok with watching it for the next couple of months, unless there is an issue, and going from there.  Lillian had taken a pretty hard fall a week or so before and took a header, I think she broke it in the fall.  Her glasses took a pretty bad hit so I believe that is what occurred.   I have been vigilant about brushing and flossing twice day and she also has a cavity in the tooth above the broken tooth.  Again, something we are keeping an eye on for the time.

Thursday Lillian had her 11 year check up with her pediatrician and I tell you I almost fell into tears when she got on the scale.  She had gained three, THREE more pounds since November.  AND, she grew an inch and a half taller.  It's been about 9 months of real food going in her tube feedings and she has gained at least 6 pounds.  It is just overwhelming how much she has grown physically  n more ways that one.  I find myself wanting to tell random people how much weight she's gained and they look at me like I'm nuts.   HA!  (which I guess is partly true)  I don't even know if they use the terminology failure to thrive with children after they are out of the infant/toddler stage, but it is delightful to see my daughter THRIVING.  She actually has a BMI now.  That's big stuff to this Momma.  I almost couldn't focus on anything else after I saw him push the scale over the 50 pound mark....52 pounds.  Thank you Lord for the wisdom given to me to press forward and the therapist who made the suggestion and the prayers and gift of a friend who made blending possible!!  Did I mention I was excited about her weight??  😂 Rambling on a bit, no?  Moving on....

So, to end my day today I had the privilege of blessing a family with a meal whose daughter has been very ill and has struggled her entire life.  There is nothing like connecting to another Mom who has and is walking through a similar journey.  It is a deep connection for me.  I feel like my heart is tied to them.  The loneliness, the envelops me from time to time, passes in those brief moments of connection.  The Lord is so good and He sends me the best.  this journey with Lillian has and continues to teach me so much about loving and reaching out to others.

I shared this picture on Instagram and I still can't get over how grown up she is looking. 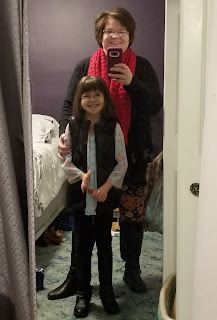 Posted by Michelle at 8:58 PM No comments: