Urology checks in and walking a new walk...sort of...

Today we had to be in the Louisville area at eight a.m., yes, I said 8 AM, for a renal ultrasound.  I thought about rescheduling, however, I figured we might as well just get it over with. So up before five and out the door at 6:47.  At least it's summer, otherwise it would likely have been dark.  We had to travel to a different Norton hospital, which is a place we've never been before.  Missed an exit, got lost trying to find actual place we were supposed to be.  Stressful.  By the time we arrived, she was crying because she had to "go" so bad.  Thankfully, they were able to get the bladder ultrasound ( her crying hysterically because she had to go so badly) and the rest of the test was easy.  Then, we arrived for our appointment.  The radiologist hadn't read the report yet, but the NP thought everything looked good.  So, for now, unless she becomes symptomatic, we will just do renal ultrasounds every six months.  She also said it's safe to assume that since she had reflux at age 7 she most likely still does.  If a child hasn't outgrown it by age five or so, they usually don't.  If she starts having issues, as in UTI's then we will have to go back to getting VCUG's and more invasive testing.  Missed an exit on my way home, more stress.  I do not like going new places alone...too hard to navigate.

We also got her braces about a week ago.  She's been doing well with them, although she wants to take them off after she's had them on for a few hours and she's supposed to wear them all the time until she goes to bed.  Good times.

I wanted to share a bit more here, but my brain is scrambled and I keep having to reread everything I type.  Hope I don't sound any crazier than usual.

Here's some pics of her in her braces...she picked out the pattern. 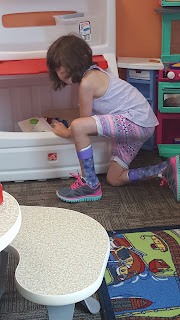 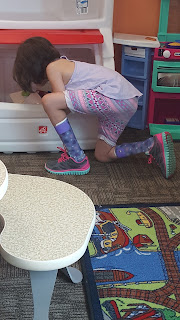 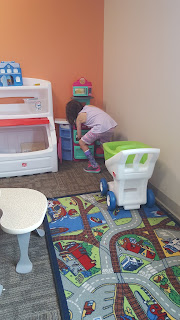 The recently added this play kitchen at therapy and I couldn't get her out of it to take a good picture, but hey, playing is definitely more important!!
Posted by Michelle at 9:40 PM 1 comment: